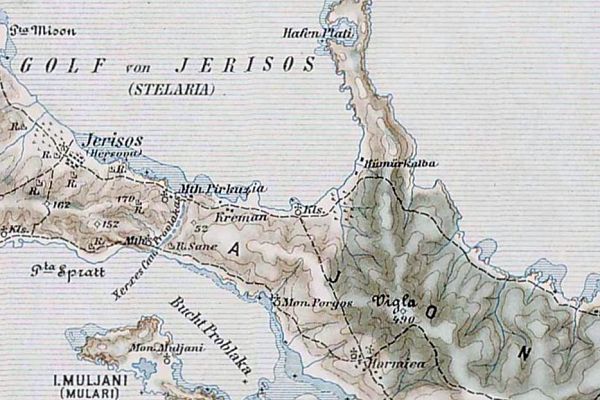 Xerxes Canal is a shipway in Northern Greece, running near the foot of Mount Athos to Halkidiki. It was constructed in the V century BC by the king of Persia, Xerxes I. It is one of the few ancient monuments reminding of the Persian Empire rule in Europe.

The peculiarities of Xerxes Canal Greece

When taken solo, Mount Athos is quite a peculiar place in terms of history. After travelers learn the reasons standing behind the construction of the canal, they get no longer surprised about such a decision of the Persian king. Furthermore, they find quite a logical explanation for his actions: the canal could significantly improve transportation between the peninsulas. The ancient maps and air photos are the only way travelers can use to learn the initial structure of the Xerxes Canal. Bides, most of the canal is now under the central road of the peninsula.

The total length of the Xerxes Canal on Mount Athos was 2 kilometers. Its width was 30 meters, while the depth was only 3 meters. These numbers might sound not quite impressive for modern people. Nevertheless, it was enough for two vessels to move within it in opposite directions. The Canal of Xerxes in Halkidiki occupied the area near the modern settlement of Nea Roda. This territory was formerly known as the courtyards of Mount Athos monasteries and medieval towers. Xerxes Canal originated from the northern coast and was running in the southwest direction. The canyon ended at the western side of the Tripiti village.

Less than a century after its construction, the canal covered with sediments. The only thing reminding of the ancient construction is its contours, which can be seen on the aero photos. No special signs or boards are pointing about the existence of the canal here. Nevertheless, the locals are always glad to share myths and legends with travelers.

Many scientists and modern travelers regard Xerxes Canal as an example and the monument to human vanity. Why?

The stories told by the locals and tourist guides demonstrate that the canal was a very convenient path for the Persian vessels, traveling from one gulf to another one. It ensured the possibility to stay unnoticed from Mount Athos. This version found its reflection in the works of the ancient Greek historian, Herodotus. He mentioned that the leading Persian military commander, Mardonios, lost most of his fleet here during the times of the Greco-Persian Wars. During the first Persian invasion in Greece, the severe storm destroyed 300 vessels and killed about 20.000 of Persian soldiers.

The king of Persia, Xerxes I did not want to follow that fiasco. While preparing for the second Persian invasion in 483 BC, he commanded to construct the canal over the neck of Mount Athos. It took him 3 years to build it. The works were held under the supervision of two Persians – Bubares and Artachaies. The workers from around the world and the neighborhood of Mount Athos were forcibly recruited to build it.

They started to dig the ground along the line, passing through the neck. Since the slopes were almost vertical, the ground kept on moving down. The workers had to dig the ground, again and again, several times. Later, the Phoenicians and Egyptians came here according to the order of Xerxes I to continue the works. They had an approach that significantly differed from the previous one. While they were digging in width, they understood that it was a more efficient way to increase the depth of the canal and make way deeper into the peninsula.

Xerxes Canal was finished in 480 BC. According to Herodotus, it had the length of “12 phases.” It was fenced with the sea walls for protection from damage. Nevertheless, over time, this man-made canyon fell into disrepair.

After the Persian fleet went through the canal during the battles of Artemisia, and Salamis, it was no longer used. The results of drilling evidence about this fact: there were no shells and petrified marine inhabitants at its bottom. Regarding the invasions, they took place during the period from August to September in 480 BC and did not bring the desired victory to the Persians. Thus, as you see, the canal became a construction that was used for a few ineffective invasions. One has no reason to argue about this fact. According to Herodotus, Xerxes did not even hide his intention to become a part of history thanks to the construction of this ancient construction.

At present, Xerxes Canal is completely silted up, which makes it difficult to recognize the place of its location. Nevertheless, the researches held by the British and Greek archaeologists and geophysics during the period from 1991 to 2001 confirmed the rumors about its existence from a scientific point of view.

To find Xerxes Canal and have a walk within its area, you should travel to Mount Athos to the resort city of Nea Roda. It sits 115 kilometers southeast of Thessaloniki. You can get there by bus and using a rental car. To access this destination from the settlements sitting close to Nea Roda, you will need to catch a taxi. Besides, local residents often travel to Mount Athos on weekends. They will gladly give you a ride here for just a few EURO and show the location of the canal.